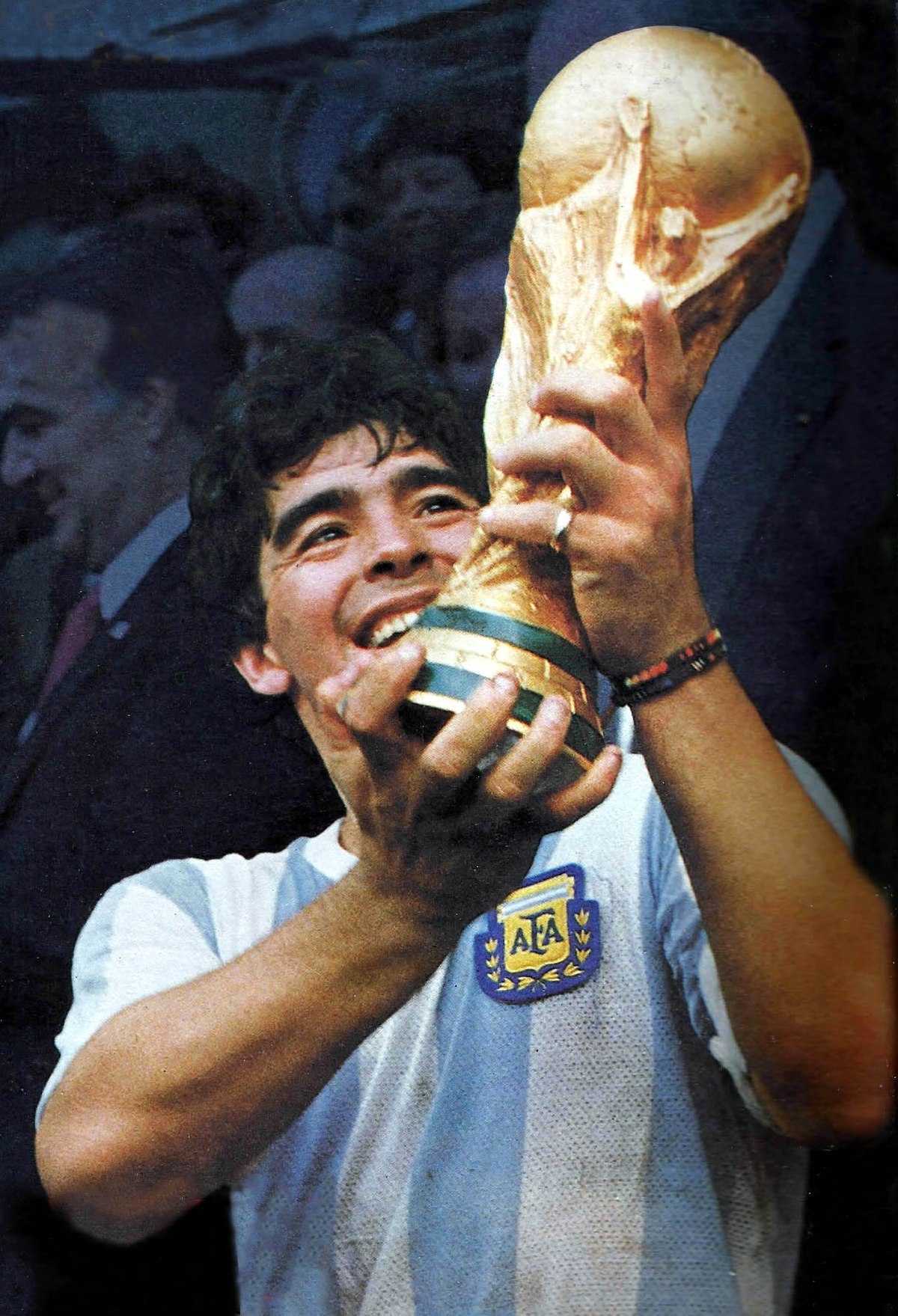 Genius. Maverick. The Greatest. Icon. Force of nature. Flawed. Cheat.
Just where do you start when you try and sum up the footballing life of Diego Maradona?

Certainly some of these words or phrases are true; perhaps all of them are. But it's these inherent contradictions that make Maradona the most compelling and charismatic footballer of all time. The child prodigy from the slums of Buenos Aires who used to give half time juggling exhibitions at Argentinos Junior's games at the age of 12 and went on to become the most celebrated player of the world's most popular game.

In the modern footballing world obsessed by statistics, the bare facts of Maradona's career aren't by any means extraordinary, certainly in goal scoring terms. His goals to games ratio of 0.50 wouldn't trouble even the top 20 in the 21st century.

Yet some things speak louder than statistics. Here was a player who starred for both Napoli and Argentina. Two workmanlike teams who he pulled, through his outrageous talent and sheer force of personality, to scarcely believable triumphs in their respective competitions.

But for those who consider Maradona a cheat and like their statistics, consider this: He was the most fouled player across three consecutive World Cups from 1982 to 1990, with his total from 1986 (54) remaining the highest single figure from one World Cup. In addition, his individual totals from 1990 (50) and 1982 (36 from just five games) also rank individually as second and third of all time. The message was clear: stop Maradona and you stop Argentina. He was that good. In one particular World Cup game against Italy, he was fouled 23 times by a single player. To add insult to injury, he was actually booked for complaining before his tormentor received a yellow card. You can just imagine what he might have achieved in the modern age where player protection rightly has a much higher priority. 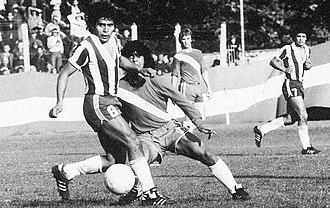 These were the three pillars that were the constants in the young Maradona's life. Indeed, they remained with him until his untimely passing. Although he became critical of and estranged from the Catholic church, he was firmly reconciled before his death, even having an audience with Pope Francis and launching a charity partnership with the Vatican that will see 100% of proceeds go towards causes he cared passionately about.

The fifth of seven siblings, young Diego was raised in the sprawling shantytown of Villa Fiorito on the outskirts of Buenos Aires. Throughout his life he remained devoted to his parents Diego “Chitoro” and Dalma "Doña Tota", his older sisters Kity, Claudia, Ana and Liliana and his younger brothers Hugo and Raul. His impoverished but devoted parents gave him his first football when he was three.

By the time he was 12, he had been picked up by a professional team – Argentinos Juniors, making his professional debut before his 16th birthday, making him the youngest player in Argentine Primera División history. He spent five years at the club, scoring 115 goals in 167 appearances before a £2.5 million transfer to Boca Juniors in February 1981, winning the league in his first season. He was transferred to Barcelona following the World Cup for a then world record fee of £5 million. 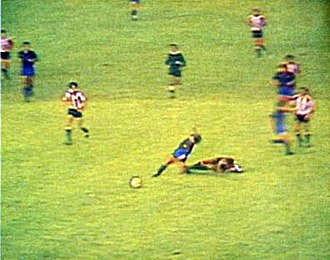 Maradona's stay in Barcelona was not an entirely happy one. Despite a not-too-shabby return of 38 goals in 58 games in two injury-hit seasons as the result of becoming an increasingly marked man, his departure from the Nou Camp was sealed by an infamous and violent Copa Del Rey Final against Athletico Bilbao that descended into chaos and a mass brawl – all played out before a 100,000 crowd and the King of Spain himself. This effectively sealed his exit from the club – for another then world record fee of £6.9 million, to Napoli, with Italy then regarded as the best league in Europe. 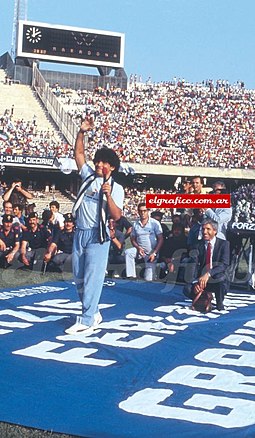 If Barcelona was a nightmare, Napoli was a match made in heaven. It seemed a strange, even perverse, choice of destination for the world's most celebrated footballer as Napoli were, at the time of his arrival, perennial strugglers against relegation. But the move undoubtedly suited Maradona's underdog, street-fighter temperament and his working-class sympathies. Prior to his arrival, no team in the south of Italy had ever won a Scudetto. When he was unveiled at the ramshackle Stadio San Paolo, he was welcomed as a messiah by 75,000 ecstatic fans. And that was just to see him sign a piece of paper confirming the transfer and juggle a ball a few times.

Napoli, without doubt, saw Maradona at the peak of his powers in a domestic league, leading the team to the most successful period in its history. This culminated in a first ever Serie A title in 1987. A further title followed in 1990, with Napoli also runners-up in 1988 and 1989. Although primarily playing as an attacking midfielder, Maradona set a then club record of 115 goals during his spell.

Off field problems led to Maradona receiving a 15-month ban and he left Napoli in 1992. 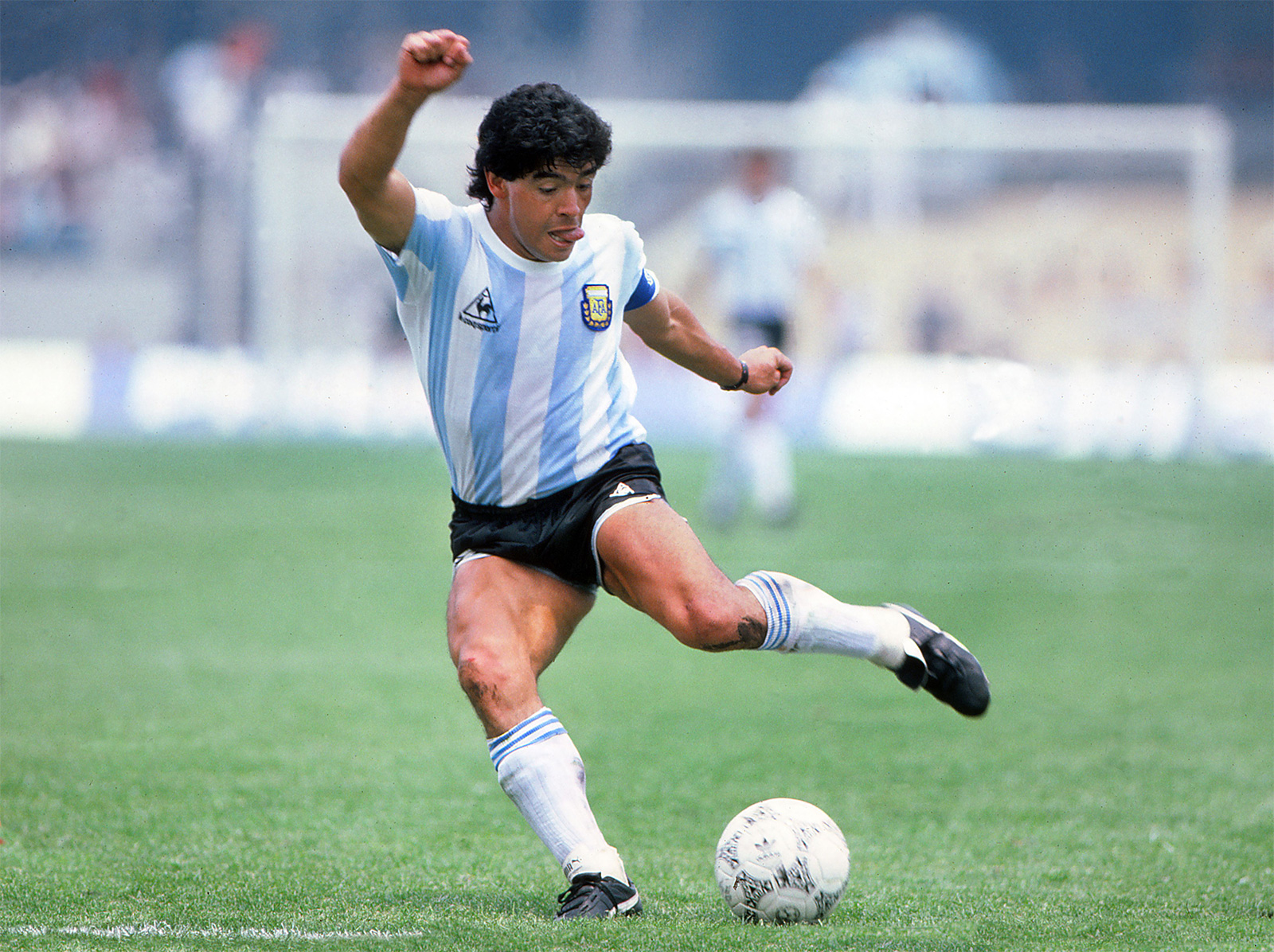 As brightly as he burned in his early career, so Maradona faded as quickly in his final active footballing years. After a year with Sevilla, he played for Newell's Old Boys in Argentina before returning to Boca Juniors for a two-year stint. Years of being targeted and the subsequent injuries had caught up and off-field problems meant that he was but a shadow of the world superstar he once was.

There followed a nomadic coaching career where, in addition to a spell managing the national side, he visited a number of footballing outposts globally such as Al Wasl and Fujairah in addition to a domestic managerial role at Racing Club.

No player can win a World Cup single-handedly. But if there is one player who has come close, it's Maradona. Written off by the Argentine press, the team arrived in Mexico in 1986 being described as divided with the coach reportedly on the brink of being sacked. The decision to make Maradona captain proved a defining masterstroke.

If there's one tournament that defines the little genius, it's the World Cup of 1986 and within that tournament, the 'Hand of God' game in the Quarter Final against England encapsulates Maradona the player more than any other. In the space of four breathless second half minutes, he pulled off the greatest ever act of football larceny in history as well as scoring the most famous World Cup goal of all time. Indeed this second goal was declared Goal of the Century by FIFA.

Handball goals are not uncommon in football, with famous later exponents including Thierry Henry, Luis Suarez, Raul and Lionel Messi. Yet as the ball arced high in the England penalty area, a spring-heeled Maradona timed his leap to nudge the ball with his hand beyond the hapless England goalkeeper Peter Shilton. Thanks to the Tunisian referee, aided by Maradona's exuberant goal celebrations, the goal stood. Looking back with the benefit of replays and stills, it's a clear handball. But such was the skill and speed with which he carried off the manoeuvre that contemporary commentators weren't entirely convinced that it was a clear piece of foul play.

There was no doubt about the second goal, however. Picking the ball up in his own half, Maradona slalomed through the England half, leaving defenders trailing in his wake. A lung-busting 60 yard, 10 second dash towards the England goal. A total of just 11 touches. Exclusively with his left foot. He finished off with a feint that left the goalkeeper prone on the turf before slipping the ball into an empty net. The goal was an exhibition of close control, balance and Maradona's relentless will to dribble at the opposition. And all this on a pitch described as bobbly. 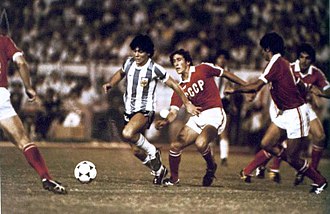 Further Maradona master classes followed in the Semi-Final against Belgium, where he scored a brace in a 2-0 victory and in the Final against Germany. Tightly marked in the Final, Maradona inspired Argentina into a 2-0 lead before the customary German fightback. With four minutes remaining, Maradona threaded a superb, defence splitting pass for striker Burrachaga to apply the coup de grace. Game over. Job done. National Hero status ensured.

During his time with the Argentina national team, Maradona scored 34 goals in 91 appearances, also appearing in the World Cups of 1982, finishing 3rd, and in 1990, where he led them to a Final loss against Germany.